They’ve been in the business for well over 10 years at this point, and they make well-crafted pickleball equipment for all ranges of ability.

One of your first decisions will be whether to go for a graphite paddle or a composite one.

But many intermediate and advanced players love their graphite paddles because they’re both lightweight and powerful.

Despite their name, the Rally brand has multiple pickleball paddle ranges which include both graphite and composite paddles - even the ranges with “graphite” in the name.

(Some of the below links are affiliate links which means we get paid a bit if you click through and buy something — don’t worry it doesn’t add anything to your cost! Just helps keep the site running.) 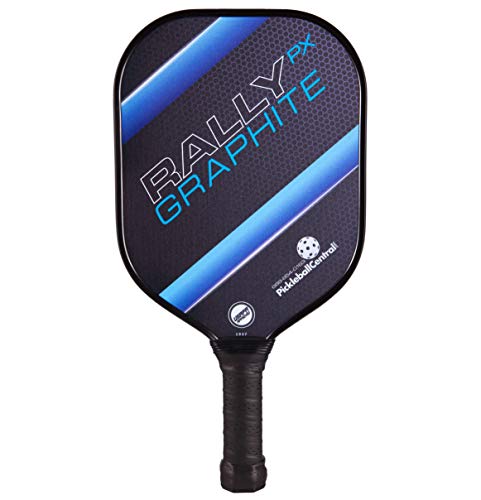 (Not to be confused with the Rally PXL Graphite)

The Rally PX Graphite is a best seller with retailers in the category of pickleball equipment.

And customer feedback gathered through online retailers is very positive.

On the Amazon page for example, after well over 500 individual customer ratings, the average Amazon customer rating comes in at an impressive 4 and a half stars out of 5.

Properties of the Paddle

The Rally Graphite PX is one of the most well-rounded paddles in Pickleball Central’s Rally line. And there are several reasons for this.

One of them being the weight of the paddle, at 7.8 ounces, it suits players of every level of ability.

The paddle is made up of a durable and powerful honeycomb composite polymer core, making it strong yet soft. And this has two main benefits.

It helps provide a large sweet spot and offers consistent redaction and pop one impact with the pickleball. It’s also gentle on the joints too.

Then there’s the paddle’s face. The textured graphite carbon face enables excellent ball control and spin. And better placement too.

The rigid structure of the paddle’s graphite face makes it really easy to redirect and put away the pickleball.

Of course, this is further helped along by the size of the paddle’s face, coming in at just under 10 inches in length, and just over 8 inches in width.

The handle is just under 5 inches long and has a medium circumference.

The perforated cushion grip is not only a comfortable size to hold, but it also provides extra cushioning when the pickleball impacts.

But what really makes it a perfect grip is just how smooth it is, AND the tackiness of it.

No matter if you’re in wet weather, or have sweaty hands, the paddle will remain firmly in place throughout several rounds.

In terms of value for money, they rated it at 4 stars out of 5, which is good.

In terms of negatives, you do hear of the odd case of a paddle getting damaged. However, if you report it to the manufacturer, you will get an excellent after-sales service.

A minority of customers have also reported that the edge is quite pronounced, but with such a large face on the paddle, we suspect most players won't be affected by the edge. 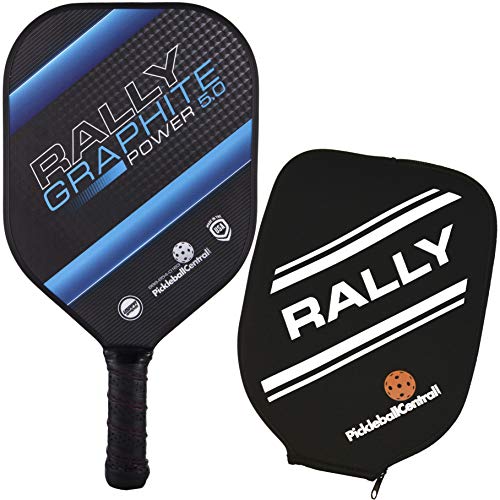 The Rally Graphite Power 5.0 is even better than the Rally PX Graphite - it’s the manufacturer’s top-end performance paddle.

It’s somewhat more expensive than the Rally Graphite PX, but you may well decide it’s worth the extra money.

Although the Rally Graphite Power 5.0 has been around since 2019, it does not appear in the bestseller lists in the category with online retailers.

But we don’t think this is a reflection on the paddle’s performance, but rather comes down to the paddle’s significantly higher price tag.

At the time of writing this article, there have been almost 100 individual customer ratings on Amazon, resulting in an average Amazon customer rating of 4 and a half stars out of 5.

Properties of the Paddle

It offers superior ball control, which is thanks to several of its properties.

These include the extra-large head, the enhanced sweet spot, and reduced vibration.

The flip side of having an extra-large head however is the additional weight.

With a weight of 8.2 ounces, it’s the heaviest in the manufacturer’s range.

But we would argue that it’s still very lightweight and that the weight of the paddle is unlikely to cause problems in the game once you’re used to handling it.

The core of the paddle, composed of carbon black polymer, is quite thick, providing a good rigidity across the paddle.

The overall effect of this is to improve the feel and response while reducing the vibration caused by impact.

The face of the paddle is hybrid graphite, fiberglass, and polymer composite, and it features Rally’s Vertigrab surface.

What this does is to spread the impact of the ball across the paddle’s surface to give enhanced control, a smoother feel, and better consistency in shots.

The grip on the handle is also impressive. There are two grip options, a standard grip, and a thin grip.

With the standard grip, you get a stitched cushion that repels sweat as you play and reduces vibrations from impact.

The thin option on the other hand doesn’t offer reduced vibrations, but instead provides a reduced grip circumference and gives additional shot feedback.

It’s worth noting at this point that this paddle comes with a padded cover to ensure your gear is kept in tip-top condition when not in use.

In terms of value for money, they rated it at 4 stars out of 5, which is good.

But the most favored feature rated was the comfort, where it earned a whopping 5 stars out of 5. This was surprising even to us.

We thought that the paddle’s relatively higher weight would make it uncomfortable for some players to use, but apparently not.

In terms of negative feedback, some customers have reported that the Rally Graphite Power 5.0 is not a hard-hitting or driving paddle.

While other customers have reported that it’s a little dead for dinking. So there are clearly some mixed views there.

Judging from customer feedback, we feel the Rally Graphite Power 5.0 is a great choice of paddle for players at every level of ability, from beginners through to tournament winners.

The pickleball community certainly seems to like Rally Graphite paddles - and for good reason to. They’re particularly well made, do what they’re meant to do, and do it well.

In terms of value for money, they’re  mid-priced, since pickleball paddles can vary quite considerably in price from as little as about $20, all the way up to $200 or so.

The important take-home message here however is that, the paddle to get depends entirely on your playing style and skill.